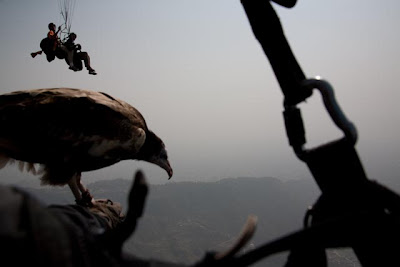 A friend of ours had told us about Parahawking in Nepal. It's paragliding using hawks to find the good thermals. We watched a bunch of YouTube videos before we left, and were very excited to go once we arrived in Nepal. The parahawking is done in Pokhara, Nepal -- a 7-hour bus ride from Kathmandu. We were able to fly with two Egyptian vultures, Bob and Kevin. The great part is that we each got a falconry glove and were able to feed the vultures mid-air! In the picture at left, you see Bob on my fist as well as Tadashi and Brad in the background (Tadashi's in front). It was absolutely amazing.


The man who started parahawking, Scott Mason, works out of Maya Devi Village, which he started with two friends, Graham and Adam. The three live at the village about half the year, along with Scott's girlfriend Anita and a nice Nepali family that manages the village. The Village is really just 6 structures, including an aviary for Scott's birds. Scott has been a falconer since age 11 and does the parahawking with rescue birds that he trains himself. He also starting an organization to save the vultures in the area, which are in grave danger of extinction because of use of a commonly-used anti-inflammatory for cattle. They have one guest cottage in the village, which we are able to stay in. It's so peaceful here, it will be hard to leave.

We arrived in the afternoon, and were lucky enough to see a bunch of people landing. We made appointments to go first thing the next morning. 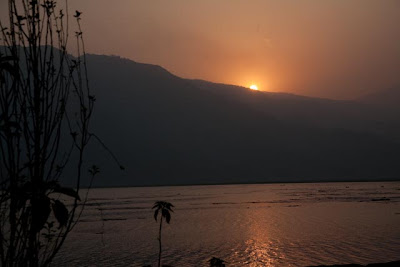 The view from Maya Devi's Restaurant
The launching point is a 20-minute drive from Maya Devi, but only Anita and Scott were available to hold Kevin and Bob. That meant Scott driving a stick-shift jeep with Bob on his fist. Scott's got some mad skills, especially considering the road here is in awful shape. 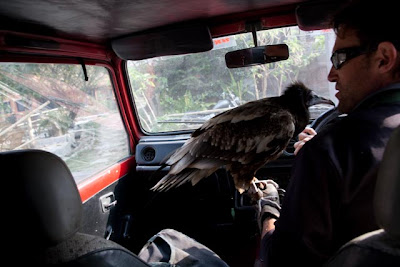 Bob the vulture & Scott the human 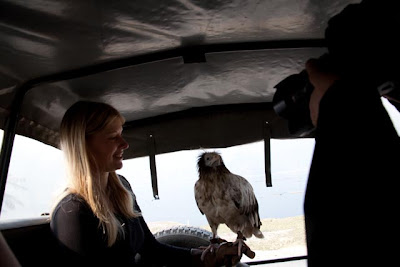 Anita, Kevin and a little bit of Tadashi

I got to hold Bob while Scott and Brad got the gear ready. Bob's a heavy guy -- my hand was tingly when Scott took Bob off my fist. Vultures tend to get a bad rap, but these ones have nice dispositions and are quite friendly; in fact, they're almost dog-like. 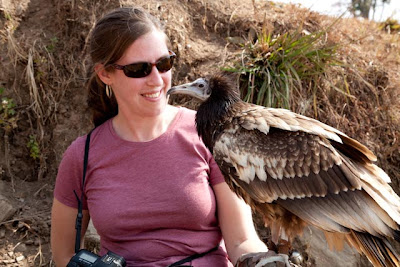 New best friends (photo by Tadashi Tsuchida)
Tadashi had a turn holding Bob while I was suiting up. 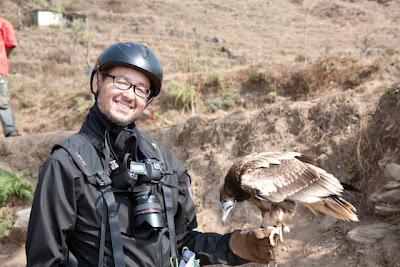 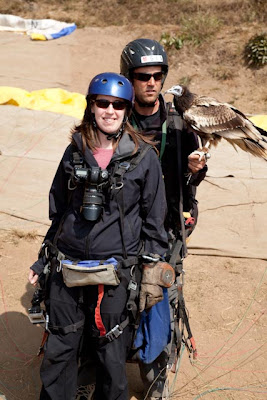 Scott, Bob and I ready for lift off (photo by Tadashi Tsuchida)

It sounds a little scary to run off a cliff, but surprisingly, I couldn't really tell that we had left the ground until I looked down. The first bit was quite bumpy while we were finding the thermal, and I held on to the harness quite hard. I didn't think I would have the gumption to even break out the camera. Luckily, the flight was just rough for the first 5 minutes, and after this I felt comfortable enough to take pictures.

I couldn't see through the viewfinder very well, so most of my shots are with the wide angle lens. But I still think I got some good ones. All these photos are of Tadashi, Brad, Bob and Kevin. 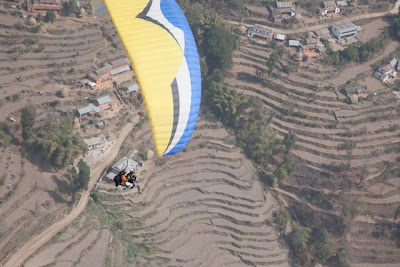 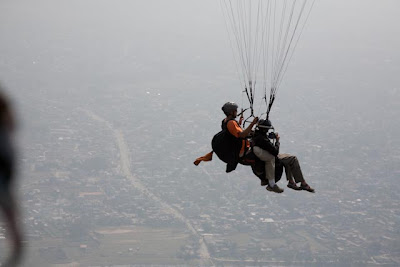 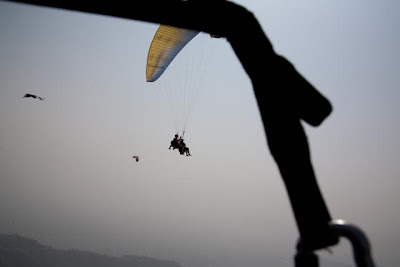 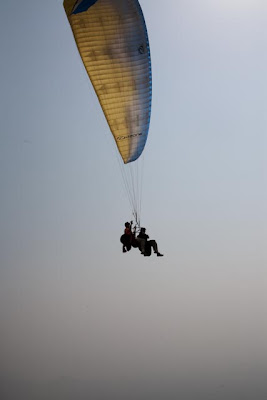 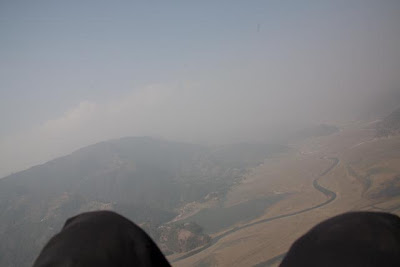 As I said before, the great part about parahawing is being able to feed the birds mid-flight. I had a falconry glove on my left hand, and a pouch full of pieces of raw buffalo meat. I would make a fist and, holding my palm towards my body, and put a piece of meat on top of my fist. Scott would call the bird with a whistle, and either Bob or Kevin would come in and land on my fist -- midair! Sometimes they would grab the food and run, but other times they would hang out on my fist for about 30 seconds. It was absolutely amazing. 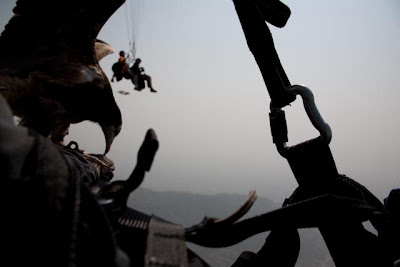 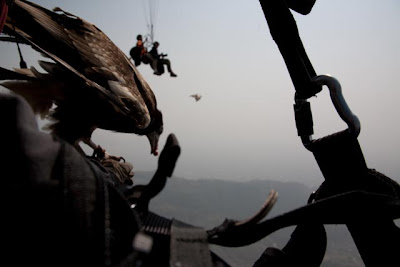 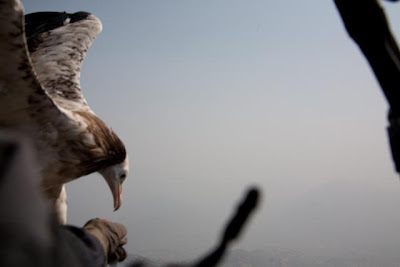 Kevin coming in for his turn
We were originally going to do the "Kev-Cam", which entails putting a small camera on Kevin's back. Unfortunately, this makes Kevin a target for the eagles, so we weren't able to do it. Kevin was recently pulled to the ground and was about to be a eagle's lunch before escaping (alas, they forgot to turn on the camera, so they're unsure how Kevin escaped). Needless to say, all parties involved are now reluctant to put the camera on again.

We were still able to film my flight using a camera attached to the paraglider. The photo below is a screen capture from the video. The grey bar in the foreground and the perpendicular black bit on the left are for the camera. You can see Bob & Kevin behind us, as well as Tadashi and Brad on the right. Unfortunately, you can't see Scott's face in either of these. 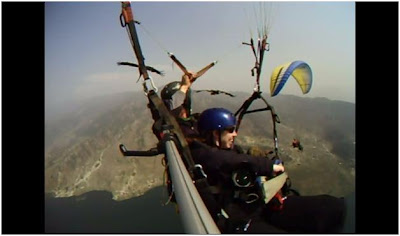 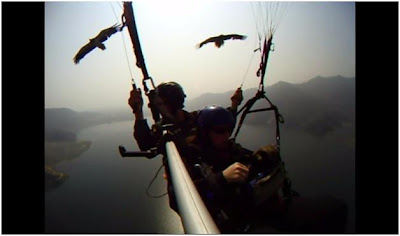 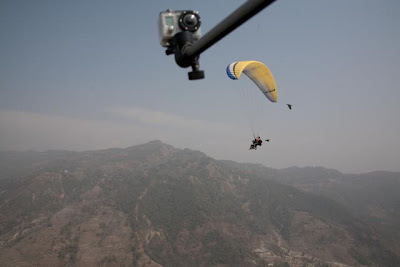 The camera and the rest of the group
Tadashi and Brad (below, pulling in the glider) landed before us. I saw Tadashi sitting there and thought he was being reflective of how awesome the flight was. 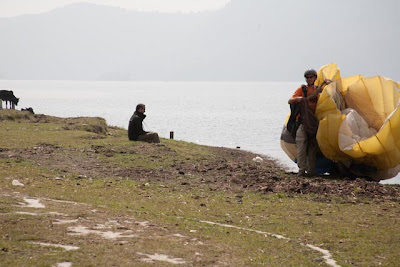 Sadly, he was just "trying to keep my stomach inside my stomach," as he put it. He got really bad motion sickness from looking through the viewfinder, but he got some excellent shots so he said it was all worth it. After the flight, Tadashi got biscuits and Kevin (below) & Bob got raw eggs. 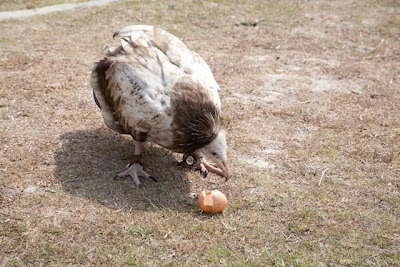 As I mentioned before, Scott rescues birds of prey. He releases the birds into the wild whenever possible, but trains them to fly with him so that they can get in shape. Kevin and Bob are both rescue birds that couldn't be released. The one below, Clive, is a Steppe Eagle that was found with a broken wing. Scott rescued it and is nursing it back to health. It hasn't grown back all of its flight feathers yet, so it can't fly. Scott is training it to fly with him, and will release him into the wild. Clive, like all the other birds here, loves being sprayed with a mister. Although it may look like Scott is being mean, Clive just loved it. 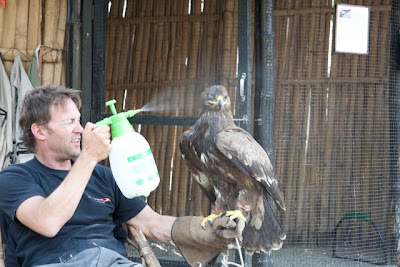 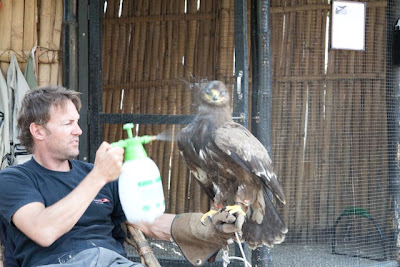 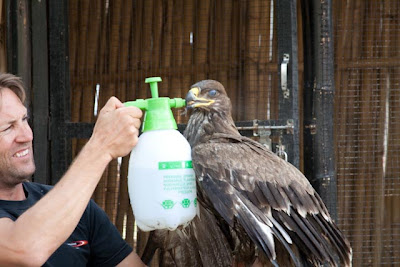 Drinking out of the mister 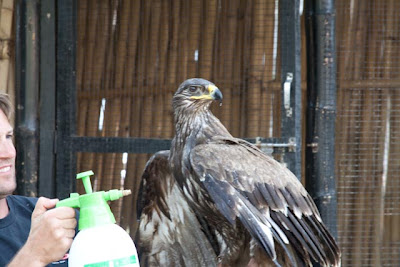 Soaking wet and lovin' it 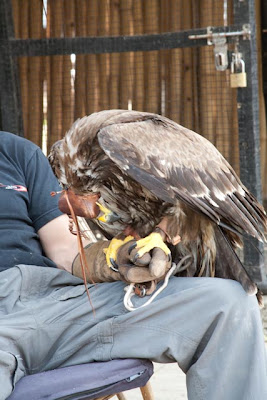 
If you want to know more about Parahawking or Scott's work with bird of prey conservation, visit his website: http://www.parahawking.com/.

Popular posts from this blog

August 02, 2014
We were lucky enough to see a Bali cremation ceremony before leaving Nusa Lembongan.  We had read about these elaborate rituals that, like the Indian Hindus, involve sending cremated remains into the water. In Bali, they send remains into the sea. With all of our beach-going, we were really hoping to see one. The day we arrived, our host informed us there would be a mass cremation two days. We were stoked! You might be thinking, " Mass  cremation? What's up with that?" Let me explain.
Post a Comment
Click here to read more>>

Crisis in Nepal: Request for Supplies

November 01, 2015
Nepal was struck by a devastating 7.8 magnitude earthquake in April, leaving millions homeless.  These people then had to struggle with the nearly non-stop monsoon rains and ensuing mudslides, while still living in tents.  The rains have subsided, but the struggle continues.  In late September, Nepal 's deliveries of supplies, food, medicine, gas (petrol), and fuel for cooking have been cut off due to protests about the new constitution. People have been forced to cut down protected forests, as that is the only fuel available.  Now winter is coming, and people are still living in tents, lacking warm clothes and fuel to stay warm.
Post a Comment
Click here to read more>>

December 22, 2015
I feel overwhelmed with gratitude by the outpouring of support from friends, family, colleagues, and students. Thanks to you, we received about a dozen boxes and two dozen bags of donations!  Not all of it was completely appropriate clothing, so some of it will be donated to local homeless shelters.  That said, the vast majority will be going to Nepal.
2 comments
Click here to read more>>